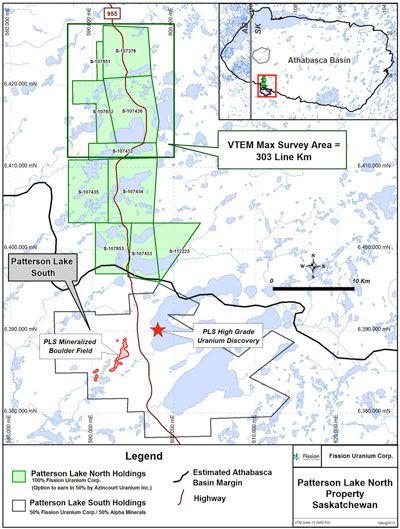 The VTEM max survey was designed to provide higher resolution over anomalous conductive areas of interest identified from previous airborne magnetic-electromagnetic surveys. The survey was completed over five days, and was flown along NW-SE flight-lines at a nominal flight height of 35m above ground. The VTEM max survey should ideally locate basement conductors and/or enhanced sandstone alteration at the expected unconformity depths in the range of 250-600 m below surface. Aeroquest recently completed data acquisition and is presently completing post-processing. The processed data is expected to be received shortly with data interpretation to follow by Fission’s technical personnel and Living Sky Geophysics Inc. of Saskatoon.

A single line 6.3 line-km ground based magnetotellurics survey is planned later this fall as a follow-up to the airborne survey.

The total budget for the summer and winter programs planned at PLN has been set at $1.5 million, with approximately $1 million to be spent on the winter drill program.

PLN is immediately adjacent to Fission’s joint venture PLS property (Fission 50% / Alpha 50%) and 5.7km north of where Fission has discovered high-grade uranium mineralization in bedrock in four separate pods. Prior to Azincourt’s earn-in, Fission spent $4.7 million, principally on airborne and ground geophysics with some diamond drilling.

“It is great to start the actual exploration targeting work necessary to advance the project towards the drilling stage. The VTEM max survey system and specs are ideally suited to produce the high quality data needed for targeting our northern PLN project area.”

High grade uranium occurrences in the Athabasca Basin generally occur within metasedimentary basement terrains with metapelitic lithologies and are associated with reactivated structural traps with hydrothermal alteration.  These lithological-structural corridors can be prospective for hosting high grade uranium deposits.  Modern geophysical surveys are capable of distinguishing and identifying lithology, structural features and alteration zones.  Proper interpretation of these survey results can be used to effectively target drill holes.

PLN lies within a large basin scale north-east NE trending gravity low structural corridor coincident with the Clearwater Domain (granite and felsic gneisses) that also incorporates the adjacent PLS property. The former Cluff Lake uranium mine and the UEX-Areva Shea Creek deposits (42 km and 27 km to the north respectively) lie along the western margin of this structural feature. The recently discovered high-grade uranium mineralization found at PLS located 5.7 km to the south, also lies within this structural corridor. Coincidentally, PLN also lies within a complex magnetic corridor showing magnetic highs and lows and breaks in regional major features. Several EM anomalies are evident within PLN, including what may be interpreted to be the southern extension of the Saskatoon Lake EM conductor, which itself is associated with the Shea Creek deposit to the north.

PLN was acquired by staking in 2004 and became part of the Fission Uranium Corp. portfolio as part of the Fission Energy/Denison Mines agreement in April 2013. It comprises approximately 27,000 Ha, and is located about 30 km immediately south of the UEX/AREVA Anne and Collette uranium deposits at Shea Creek.

PLN is prospective for hosting structurally controlled high-grade unconformity uranium mineralization that is often associated with basement graphitic shear zones within clay altered metasedimentary basement lithologies. These features have unique characteristics that can be identified by geophysical surveys.

The technical information in this news release has been prepared in accordance with the Canadian regulatory requirements set out in National Instrument 43-101 and reviewed on behalf of the company by Ted O’Connor, P.Geo. President and CEO of Azincourt Uranium Corp., a qualified person.

Azincourt Uranium Inc. is a Canadian based resource company specializing in the strategic acquisition, exploration and development of uranium properties and is headquartered in Vancouver, British Columbia. Common Shares are listed on the TSX Venture Exchange under the symbol “AAZ”.