Vancouver, BC – December 11, 2017 – Azincourt Energy Corp. (“Azincourt” or the “Company”) (TSX-V: AAZ) is pleased to announce it has signed a non-binding Letter of Intent (“LOI”) with New Age Metals (TSX.V: NAM) (“the Optionor”) to acquire up to 100% interest in five lithium exploration projects located in the Winnipeg River Pegmatite Field, Manitoba, Canada.

The agreement covers the Lithium One, Lithium Two, Lithman West, Lithman East and Lithman North projects.  The land package included in this agreement represents the largest mineral claim holdings (6000 hectares) of projects for the lithium group or type of minerals in the Bird River Greenstone Belt, which contains the Winnipeg River Pegmatite Field.

The Winnipeg River Pegmatite Field is host to numerous lithium-rich pegmatites in addition to the world-class Tanco Pegmatite, a highly fractionated lithium-cesium-tantalum (LCT) type pegmatite that has been mined at the Tanco Mine since 1969 for spodumene (a major rock unit for lithium (Li)), tantalum (Ta), cesium (Cs), rubidium (Rb), and beryllium (Be) ores.

Three of the five projects are drill ready:

“We are pleased to be able to announce this LOI with New Age Metals.,” said Azincourt Energy Chairman, Ian Stalker.  “The lithium market is obviously very strong right now, and the near-term future for lithium demand remains extremely positive.  Our decision to expand Azincourt’s focus to include lithium and other materials is something we feel strongly about.  To get a foothold and exposure in this environment, at this time, is an important and strategic step for us.

“This, along with our uranium exposure, separates us from a range of junior exploration companies out there and augurs well for our future and investment strategy, particularly now that the uranium market has also started to show signs of life,” continued Mr. Stalker. 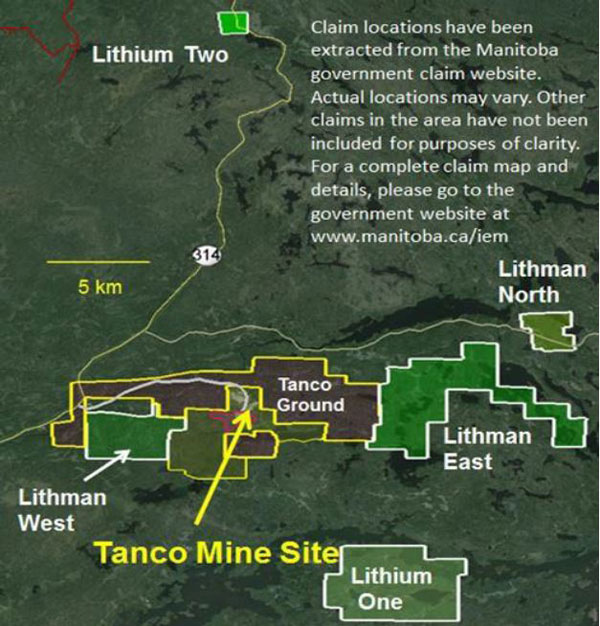 The Optionor, New Age Metals (“NAM”), under its 100% owned subsidiary Canadian Lithium Development (CLD), controls the five project areas. For up to 60% of CLD and the five projects included in this agreement, the Company will pay the Optionor $200,000 (CDN) staged in four equal payments over the next 18 months.  In addition, the Company will issue up to 1,000,000 shares, staged in four equal installments, by the third anniversary of the signing of the definitive agreement.  Work expenditures in the projects total $2.85M (CDN) over three years, with $500,000 year one, $600,000 year two, $1M year three, plus an additional $750,000 to reach the 60% threshold.

To earn 100% the Company must meet additional requirements.  Within 90 days of the Company earning its 60% in CLD or the project, NAM has to the option to enter into a joint venture on a 60% AAZ/40% NAM basis using a standard Canadian Junior Mining joint venture agreement.

In the event NAM does not elect to enter into the above-mentioned agreement then the Company must issue an additional 1,000,000 shares to NAM within 15 days of NAM electing not to participate in the Joint Venture.  The Company must also expend an additional $1 million dollars by Oct 30, 2022, on any of the projects it elects to so long as all projects are in good standing. In the event the Company does not make the $1 million expenditure Azincourt’s percentage will remain at 60%.

Upon completion of all stock, property expenditures and cash payments Azincourt will have

earned 100% of CLD subject to a 2% net smelter royalty on all five of the projects.

Under terms of the non-binding LOI the Company must complete its due diligence and enter into a definitive agreement no later than January 15, 2018.

All securities issued in connection with the property option will be subject to a four-month-and-one-day statutory hold period. The property option remains subject to a number of conditions, including negotiation of definitive agreements, approval of the TSX Venture Exchange, and such other conditions as are customary in transactions of this nature.

The contents contained herein, which relates to Exploration Results or Mineral Resources, is based on information compiled, reviewed or prepared by Carey Galeschuk, Principal Consulting Geoscientist for New Age Metals.  Mr. Galeschuk is a Qualified Person, as defined by National Instrument 43-101 and has reviewed and approved the technical content of this news release.