Azincourt Energy Elects Not to Retain 10% of PLN, Will Focus Athabasca Development Efforts at East Preston

VANCOUVER, British Columbia, March 28, 2019 (GLOBE NEWSWIRE) -- AZINCOURT ENERGY CORP. (“Azincourt” or the “Company”) (TSX.V: AAZ, OTC: AZURF), announces that it has elected not to retain its ten percent (10%) interest in the Patterson Lake North Property (“Patterson Lake”).  The Company held an interest in Patterson Lake through an option and joint venture arrangement (the “Joint Venture”) with Fission Uranium Corp., and later Fission 3.0 Corp.  In accordance with the terms of the Joint Venture, the Company was required to fund a pro rata portion of any development at Patterson Lake, in order to maintain its interest.

The Company is currently focusing its efforts and available capital on development of the East Preston Uranium Project in the western Athabasca basin in Northern Saskatchewan.  As a result, the Company has elected not to fund its pro rata portion of planned expenditures at Patterson Lake.  This election allows for the Company to concentrate capital in the ongoing drilling and exploration program being conducted at the East Preston Uranium Project.  For further information regarding ongoing development at East Preston, readers are encouraged to review the Company’s news release of March 20, 2019.

Azincourt is currently earning towards 70% interest in the 25,000+ hectare East Preston project as part of a joint venture agreement with Skyharbour Resources (TSX.V: SYH), and Clean Commodities Corp (TSX.V: CLE). Extensive regional exploration work at East Preston was completed in 2013-14, including airborne electromagnetic (VTEM), magnetic and radiometric surveys. Three prospective conductive, low magnetic signature corridors have been discovered on the property. The three distinct corridors have a total strike length of over 25 km, each with multiple EM conductor trends identified.  Ground prospecting and sampling work completed to date has identified outcrop, soil, biogeochemical and radon anomalies, which are key pathfinder elements for unconformity uranium deposit discovery.

Only one of the corridors has been drill tested to date, successfully intersecting structurally disrupted graphitic metasedimentary rocks and anomalous pathfinder elements (including uranium) at the Swoosh S6 target using a combination of Horizontal Loop EM (HLEM) and gravity as primary targeting tools. 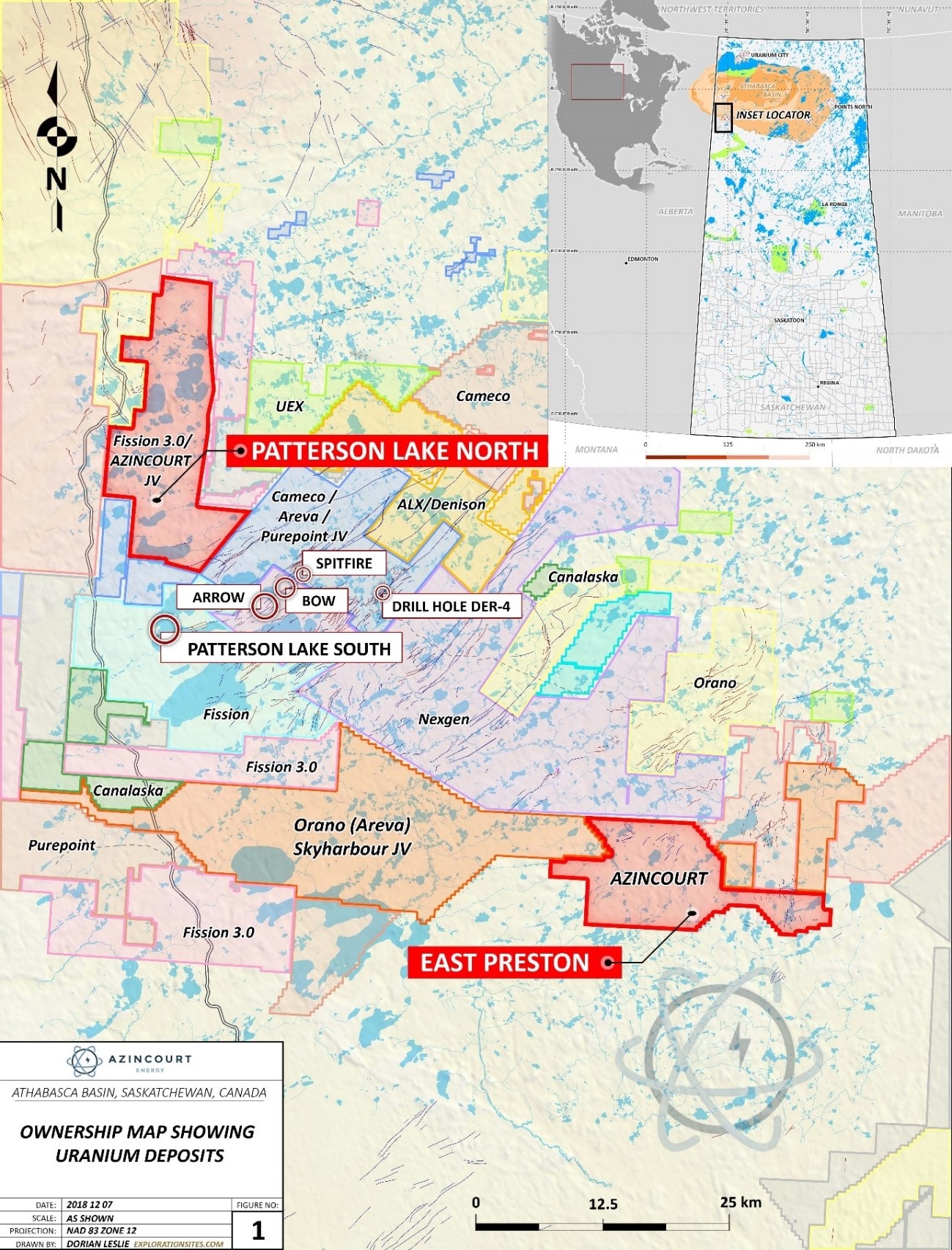 The Company completed a winter geophysical exploration program in January-February 2018 that generated a significant amount of new drill targets within the previously untested corridors while refining additional targets near previous drilling along the Swoosh corridor.

Ground-truthing work confirmed the airborne conductive trends and more accurately located the conductor axes for future drill testing. The gravity survey identified areas along the conductors with a gravity low signature, which is often associated with alteration, fault/structural disruption and potentially, uranium mineralization. The combination/stacking of positive features has assisted in prioritizing targets.

The Main Grid shows multiple long linear conductors with flexural changes in orientation and offset breaks in the vicinity of interpreted fault lineaments – classic targets for basement-hosted unconformity uranium deposits. These are not just simple basement conductors; they are clearly upgraded/enhanced prospectivity targets because of the structural complexity.

The targets are basement-hosted unconformity related uranium deposits similar to NexGen’s Arrow deposit and Cameco’s Eagle Point mine.  East Preston is near the southern edge of the western Athabasca Basin, where targets are in a near surface environment without Athabasca sandstone cover – therefore they are relatively shallow targets but can have great depth extent when discovered.  The project ground is located along a parallel conductive trend between the PLS-Arrow trend and Cameco’s Centennial deposit (Virgin River-Dufferin Lake trend).

The technical information in this news release has been prepared in accordance with the Canadian regulatory requirements set out in National Instrument 43- 101 and reviewed on behalf of the company by Ted O’Connor, P.Geo. a director of Azincourt Energy Corp., as well as a qualified person.

Azincourt Energy is a Canadian-based resource company specializing in the strategic acquisition, exploration and development of alternative energy/fuel projects, including uranium, lithium, and other critical clean energy elements.  The Company is currently active at its joint venture lithium exploration projects in the Winnipeg River Pegmatite Field, Manitoba, Canada, the East Preston uranium project in the Athabasca Basin, Saskatchewan, Canada, and the Escalera Group uranium-lithium project located on the Picotani Plateau in southeastern Peru.

Alex Klenman, President & CEO
Tel: 604-638-8063
This email address is being protected from spambots. You need JavaScript enabled to view it.